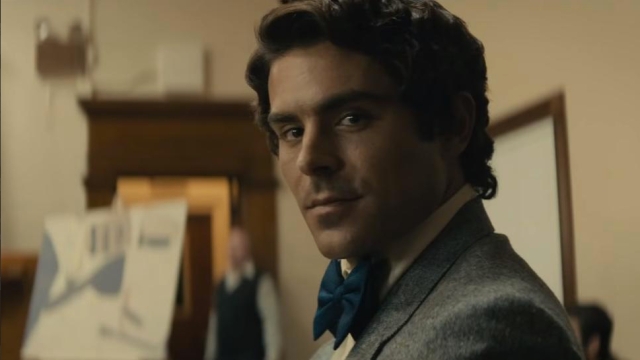 As the most notorious serial killer in American history—quite an accomplishment, if you think about it—Ted Bundy has been the focus of volumes of journalism and analysis and scads of films, mainly documentaries. Director Joe Berlinger, who made this circumspect profile of the killer, played with unusual subtlety by Zac Efron, has already made a doc series about Bundy, but apparently he wasn’t done with him. The narrative sectionalizes the part of Bundy’s life in the late 70s and early 80s that occurred afer most of his many murders had been committed, while he was living in Florida with a single mother named Elizabeth Kloepfer (Lily Collins) in relatively conventional middle class comfort. Much of the movie, in fact, it from Kloepfer’s point of view. She meets Bundy in a bar, and per his post-arrest reputation, he is charming and solicitous, even to a woman saddled with a kid, a situation she has been conditioned to believe is a deal-breaker for any long-term romantic relationship. Their first night together he doesn’t have sex with her, and makes her breakfast the next morning.

Berlinger occasionally shifts POV to Bundy, which seems odd for this kind of movie, because we all know what he did and what he’s probably still capable of. The film never shows us his murderous acts, though sometimes they are described, since Bundy is still killing young women and their deaths are being reported on the local news. When Berlinger sticks to Kloepfer, he gets a lot of mileage out of her suspicions and growing terror, even as she enjoys what appears to be the attentions of a serious, handsome man who wants nothing but the best for her. Essentially, the director is taking the piss: Trying to put the audience in Koepfler’s shoes while dangling bits of business in front of our noses that show Bundy is at least “suspicious” of being involved in these murders. The idea seems to be to give us an idea of how Bundy got away with it for so long. He was hiding in plain sight, a nice guy with a steady, loving girlfriend. Ideally, Berlinger wants us to question our own suspicions as much as Kloepfer questions hers.

To say he doesn’t succeed is perhaps asking too much of Berlinger’s process, but it seems like a lot of wasted energy when we know the outcome from the beginning. Nevertheless, Efron earns his star billing and Berlinger knew what he was doing when he cast him. It’s not just that Efron looks eerily like Bundy. It’s that you can never get a bead on him as a human or a monster, and that’s all the movie needs to make its point, not this gaslighting business. The movie necessarily takes a deep dive in meaning after Bundy is arrested and put on trial, since Kloepfer turns into an accessory after the fact, so to speak—Bundy even hooks up with a new girlfriend after he’s denied bail. In any case, the trial has already been covered many times (it was televised live), so there are no surprises like the ones that highlight the first half of the movie. Berlinger obviously thought this man was still ripe for the pickings, but maybe he’s just too infatuated to quit.

This entry was posted in Movies and tagged Ted Bundy, Zac Efron. Bookmark the permalink.