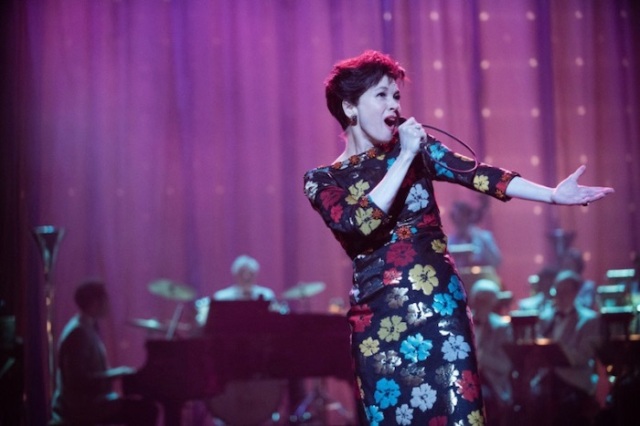 Usually, I don’t comment on acting when I review a film, mainly because I expect professionalism from everyone involved and good acting should be a given. Normally the acting is good, so there’s no point in talking about it unless it’s extraordinary in some way. With this movie about Judy Garland, however, I feel it’s necessary to discuss Renee Zellweger’s performance, and not just because it earned her an Oscar, but rather because of what it says about imitation and how we tend to judge quality by measuring verisimilitude. Zellweger doesn’t look much like Garland and she makes up for this shortfall by focusing on physical and vocal tics. She’s not entirely successful on this front, but, inadvertenly perhaps, a compelling character comes through, and whether or not it’s Garland isn’t really important, though I imagine to some people it is. In any case, the movie, which isn’t particularly well made, could be much worse if this character were done differently.

This realization came to me during Zellweger’s first big production number, “By Myself,” which is a knockout, but not because she sounds that much like Judy Garland. The actor seems to have decided that it would be pointless to try to match Garland’s tone, and so she simply turns the song into a tour de force of overdetermined vocalise. The song builds on its sense of drama organically and you feel exhausted at the end for both Zellweger and Garland. She may not be Judy, but this was probably what it felt like to see Garland perform at her most florid. And in a sense, the rest of the movie doesn’t need to keep hitting this kind of high because we are meant to understand that Garland is on the way down anyway.

In fact, she would be dead about a year after the events chronicled in Judy transpired. It’s 1968 and Garland has run out of money, which is bad since she has divorced from her agent, Sid Luft (Rufus Sewell), and wants full custody of their two children. Luft is somewhat magnanimous about the arrangement but practical in the sense that he can’t see Judy dragging their kids around to her performances. She even puts them on stage, not so much to exploit them but rather to give them something to do. Judy, of course, is a wreck, and one of the movie’s biggest miscalculations is to psychoanalyze her downfall by referencing multiple flashbacks to her childhood when she was bullied and molested by Louis B. Mayer (Richard Cordery), and while it’s clear that these incidents damaged her self-esteem, her problems are mostly bound up in an ego that doesn’t know its own strength. So when she’s offered a lot of money to do a residence in London she takes it even though it means leaving her children behind and exposing herself to the kind of scrutiny that she no longer has the patience for.

Based on a play, the script has too much detail and not enough development. Frightfully anorexic and popping pills to beat the band, Garland can barely make it on stage every night and thus gives her game handlers a rough time, but we’ve seen these scenes of the temperamental star so many times before that we can pretty much chart their arcs of misery down to the second. This is Judy as the insufferable harridan, a reductive portrait that only Zellweger can save from utter horror. Though she leans too heavily on Garland’s storied fragility, she shows how a lot of Judy’s problems were self-inflicted in the sense that she knew exactly how bad she was being to others, and yet when she is on stage and in her element, or hanging out with two adoring gay fans, there’s a humanity that comes across with startling urgency. A better director than Rupert Goold might have expanded this quality to enliven the whole movie, so, yes, Zellweger deserves a lot of credit for making the film watchable, but an Oscar? I guess that’s how you judge these things in real life.

This entry was posted in Movies and tagged Judy Garland, Renee Zellweger. Bookmark the permalink.