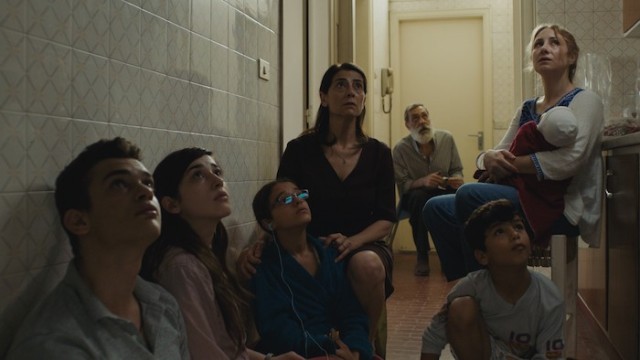 Narrative films that take as their subject current affairs face a dilemma in terms of execution. How much of the story will be irrelevant or even incorrect in years to come? What sort of viewpoint should the direction take, or should a viewpoint be taken at all? In Syria, also called Insyriated (a made up word?) in some markets, is set during the early days of the Syrian civil war, which was almost a decade ago, so in a sense the Belgian director, Philippe Van Leeuw, has some leeway with historical distance in making his decision as to how to approach the conflict, and he has chosen to generalize the circumstances as to lose any specific idea of how the war came about and how it is being fought. Essentially, this is a movie about “all war,” and while that approach doesn’t detract from the film’s dramatic power it does make it that much less convincing as a historical document.

The entire film is set within a Damascus apartment that is under siege by default due to the presence in the neighborhood of snipers. The apartment belongs to Oum Yazan (Hiam Abbass), who has been left alone with her elderly father-in-law and three children by a husband whose purpose at being away is never clearly explained, though it obviously has something to do with the war. Oum has barricaded the front door, and in the process of shutting out the world has taken in her housekeeper, Delhani (Juliette Navis), her teenage daughter’s boyfriend, and a young neighbor couple with an infant. The couple, Samir (Moustapha Al Kar) and Halima (Diamond Abou Abboud), have access to egress to Beirut through a journalist friend of Samir’s, but he has to leave the apartment to retrieve papers that will get them over the border. This act becomes the focal point of the plot, since its outcome forces Oum to consider several different unpleasant scenarios. The one she chooses is ostensibly a no-brainer: she will do anything to protect her family. However, the decision that Van Leeuw makes in order to bring home this point is brutal in the extreme, exposing the savagery that attends warfare but without the kind of context that makes it meaningful in this particular situation. All we derive from the terrible middle section is that men (specifically Arab men) are capable of the most atrocious behavior when left to their own devices.

Perhaps Syrians who watch the film will understand enough of what’s going on to know why these events unfold as they do, but for the rest of us there’s a gaping hole that just grows wider as the story reaches its conclusion. Van Leeuw understands that too much exposition ruins the flow of a movie like this, which depends on the niceties of everyday existence within a larger crisis to maintain tension and interest. But all we really come away with is the old cliche about war being hell, especially for women.

In Syria home page in Japanese.

This entry was posted in Movies and tagged Hiam Abbass. Bookmark the permalink.