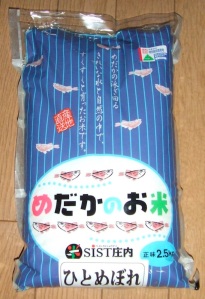 Here’s this week’s Media Mix, which is about rice and Japan’s consideration of participating in the Trans-Pacific Partnership, which would remove the import tariffs that protect Japanese farmers, in particular rice farmers. I plan to post a related article at Yen for Living tomorrow about how the TPP would affect the price of rice at the consumer level. I had planned to include that information in the Media Mix column, but it would have distracted from the main point, which is that the image of rice farmers is slightly distorted by media that are in favor of TPP but think that farmers can handle it if they’re smart and resourceful. I don’t think there’s any doubt that resourcefulness is a good thing, but since the vast majority of rice farmers are part-timers, most will be unable to compete on any level once the floodgates are open. The question, then, is whether or not the Japanese public is willing to let them fail, and maybe in the end the question is little more than a rhetorical one. There are too many factors, historical and otherwise, that point to an eventual liberalization of the market for rice and other agricultural products. If Japanese rice farmers are doomed, it seems to be an economic inevitability, not a political one. Rice farmers insist that the Japanese public can pay more for their rice and should, which is true but beside the point. The government desperately needs to increase consumer spending and one small but not insignificant means of doing that would be to reduce the average household expenditure on Japan’s staple food. The Yen for Living article will describe exactly how much more money could be in circulation if people paid less for rice, about ¥1.54 trillion.

In the same vein, a corollary issue I didn’t address in the column is what the TPP might affect other than agriculture. The financial writer Gucci goes on to say in his Aera article that Japan’s annual domestic agricultural production is ¥10 trillion. Though the loss of that production will have an effect, it won’t be nearly as momentous as the liberalization of financial markets. Japan’s private savings amounts to a staggering ¥1,400 trillion, 90 percent of which is socked away in financial institutions that use it to buy government bonds, thus keeping Japan solvent. If even 1 percent of that whole amount was snatched up by foreign financial entities promising better returns (not difficult in a country where the interest rate for ordinary bank deposits is 0.02 percent) that’s ¥14 trillion yen out of domestic circulation, which is a lot more than the loss from agricultural imports.