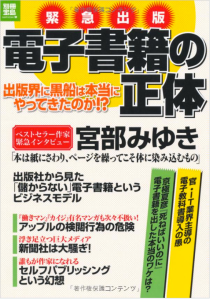 Here’s this week’s Media Mix, which is mainly about eBooks, though near the end I also comment on newspaper companies’ relationships with their delivery agents. I talk about digital newspaper subscriptions in more detail in our Yen for Living blog, but publishers’ connections to their distributors have always been special in Japan. My partner worked in a bookstore when she was a lot younger and it seems each publisher had its own peculiar way of handling things like remainders and returns. Iwanami, in line with its somewhat stuffy image, didn’t even accept returns. If a retailer bought books from them they were bought. That’s why Iwanami books always came with those distinctive thin plastic covers, just in case they sat on the shelf — or back in the storage room — for years. And because of the resale price maintenance system I mentioned in the column, bookstores couldn’t reduce the price to clear their inventories. The fact is, publishers have it good with the retail system since many are practically guaranteed a good return — as long as sales remain stable. eBooks erode that guarantee, and though it would seem that publishers could make even more money with digital content, since so much overhead would be eliminated, the publishing industry, like all businesses in Japan, is averse to change.

But it’s the newspaper business that really relies on distribution, and not just to get their product to readers. The Shincho-Yomiuri suit mentioned in the column (Asahi, I believe, also sued the magazine) implies a relationship that goes beyond distribution. Ever since I first started working as a freelance writer in Japan I’ve heard about the oshigami scheme, which basically uses distributors to push up circulation numbers that are shown to advertisers as justification for the rates they pay. The media in general — most TV stations are either owned by or have strong connections to publishers — have ignored this alleged practice, so Shincho probably knew they would be sued. This is ironic since Shincho is itself a publisher and thus also has a stake in distribution. The main point seems to be that newspapers, because they deal with so many independent delivery agents, are more reliant on oshigami. Each delivery agent, though affiliated with a specific newspaper, is its own company. Some are family owned and even have dormitories for delivery personnel and salespeople. Where I’m from in the U.S., home delivery of newspapers was carried out by elementary school kids on bicycles to earn spending money. Here, it’s traditionally been high school graduates. In fact, many agents have systems set up with newspapers for delivery personnel who want to attend university while they work for the agents. Or, at least, they used to. The bad economy has driven more people to seek employment as delivery persons so there isn’t much incentive to attract younger workers, but in any case digital newspapers would mean the end of delivery agents, and I’ve heard rumors that some are demanding that newspapers reimburse them for every digital subscription they sell. How can they do that? Obviously, the oshigami system, if it exists, would indicate collusion between agents and publishers to defraud advertisers, so publishers are not going to want to make their distributors angry. The thing is, agents benefit from oshigami as well, since much of their revenue is derived from putting advertising inserts in the newspapers, and they charge by the number of papers they deliver. Too many people are making money from physical newspapers, so publishers are making it more difficult for readers who would prefer to receive their news online.