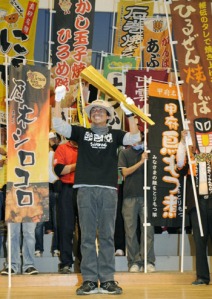 Here’s this week’s Media Mix, which is about the B-kyu Gourmet boom. In the piece I try to make the case that the movement is, in a sense, an indirect rejection of the kind of food-centered promotional gambits that the media, particularly TV, have done to death. My feeling about this style of presentation is that, besides becoming increasingly meaningless with repetition, it’s also inherently elitist, because most of the food that’s presented is celebrated for its specialness. Because of its very name, B-kyu (B-class) refutes the idea that viewers and readers automatically assume that refined dishes — as exemplified by the much ballyhooed Michelin guide — are better than the stuff they buy at their local festival.

The media are not proud, though, and they’ve happily picked up on the B-kyu boom to the point where even NHK has hopped on the bandwagon with its “Michishiru” series, which basically cannibalizes archival resources that focus on regional specialities, including food. Nevertheless, most of the media interest in B-kyu sense and sensibility is already becoming as rote and stylized as the above-mentioned attention to fine dining. Consequently, they’re apt to look for — and perhaps invent — meaning where none exists. As someone who looks on food as sustenance first and aesthetic experience second (or third), I automatically receive such coverage with a touch of skepticism, but I’m obviously not the target audience. This isn’t to say that the Japanese approach to food is unique or even more obsessive than it is in other countries — I’m sure there are a lot of Japanese who are equally skeptical, thus the “backlash” I mention in the column — only that the media, in its laziness (which may be unique), has become so dependent on food-related content that it simply shifts the style it developed for coverage of high-class food to the coverage of low-class food. Such as shift provides inadvertent entertainment value for only a short time. Sorry, but stir-fry noodles are still stir-fry noodles, whatever the sauce.

This entry was posted in Media and tagged B-kyu gourmet, B1 Grand Prix, Japanese food. Bookmark the permalink.