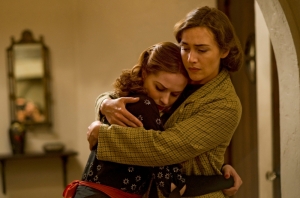 Here are my ten-best-plus movies of the year, which I wrote for the Jan. issue of EL Magazine. All were released in Japan during the 2011 calendar year. Though I saw fewer movies than I did in 2010, I believe 2011 was also a better year for movies. Since I no longer write for the Asahi Shimbun I was not compelled to see a lot of American movies that I wouldn’t have normally bothered with in the first place, so maybe my slightly brighter opinion had something to do with that. Nevertheless, there are still a lot of films that I would like to see that haven’t received distribution in Japan and don’t seem likely to receive any in the near future. And if I allowed the inclusion of TV movies on this list it would certainly contain Todd Haynes’ mini-series adaptation of James Cain’s Mildred Pierce, which was shown on WOWOW. It might have even topped The Tree of Life, in my estimation. (To those who wonder why there are no Japanese movies on this list, refer to the essay I wrote last year, which still applies.)

Speaking of WOWOW, they did a good thing by expanding to three channels full-time and dedicating one of those channels exclusively to movies. And while in terms of foreign films I would prefer less American low-brow content and a bit more edgier stuff from all countries (including the US) in order to take up the slack that’s resulted from the demise of so many theatrical distributors, they occasionally do good deeds, like that Bresson retro that keeps recurring every month. Now, how about one on Haneke? I still haven’t seen Code Unknown and Hour of the Wolf, and the DVD rental service nearest to my new apartment is basically a vending machine stuffed with episodes of 24 and Prison Break.

1. Certified Copy (Italy/France)
Imitation life is the theme of Abbas Kiorastami’s first non-Iranian film. A man and a woman drive through Tuscany, discussing art and then, after stopping in a town, themselves. The shift in tone is stark, but nothing has changed except the characters’ relation to each other, and to the audience. Whether copy or original, the conversation feels more like life than art.

2. The Tree of Life (USA)
God is in the details of Terrence Malick’s magnum opus. The most accessible portion is about growing up in 1950s Texas with a father who believes in the world and a mother who believes in the next one. The less accessible portion is about how the universe affects such choices, and making peace with the sins that childhood is so fraught with. 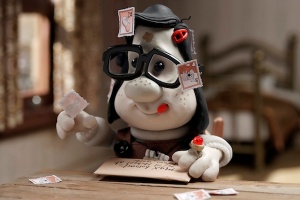 3. Mary and Max (Australia)
A lonely young woman in Australia corresponds with an elderly, Aspergers-addled man in New York over a period of 20 years, during which they bond over shared fetishes and their own resistance to intimacy. Adam Elliot’s humor is dark, and while his claymation world doesn’t look like ours, it’s the same one, a place where the innocent don’t stand a chance.

4. Inside Job (USA)
It’s not enough to hate the people responsible for the 2008 financial meltdown, says Charles Ferguson. You have to understand what they did, so that you can hate them with justifiable purpose. The value of his documentary is how it clarifies the most arcane aspects of the catastrophe, providing irrefutable evidence that the American Dream is and always has been a sham.

5. Gomorra (Italy)
Northern Italy’s Camorra crime syndicate shouldn’t be confused with the Cosa Nostra of Sicily. Human life is cheap in the Naples housing complexes depicted in Matteo Garrone’s neorealist version of Roberto Saviano’s bestseller. People don’t die according to some romantic notion of honor, but because it’s convenient to get rid of them. Everyday horrors presented in everyday fashion. 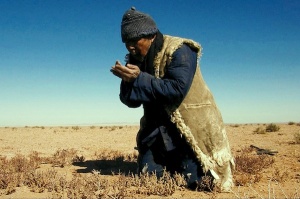 6. The Ditch (Hong Kong/France)
In the late 1950s, thousands of Chinese political prisoners died in the Gobi Desert when the country suffered a massive food shortage. Wang Bing chronicles the starvation one death at a time, the inevitable result of massive planning that went wrong. Documentary in style, the movie nonetheless acquires a kind of narrative with its own deadening accumulation of despair.

7. Surviving Life (Czech)
Animator Jan Svankmajer’s dreamlike sensibility finally serves the subject of dreaming itself. An office functionary tries to find ways of staying asleep so that he can literally spend more time with the girl of his dreams. As Freud and Jung physically battle over the man’s situation, obsession turns to enlightenment, which is what psychoanalysis is all about, right?

8. Winter’s Bone (USA)
Driven to seek information her neighbors say she has no business knowing, teenager Ree Dolly suffers for her hubris, and it doesn’t matter to the meth cookers and dealers in her stretch of the Ozarks if that hubris is born of life-and-death necessity. As an archetype of bulheadedness, Ree is a hero for our age.

9. Fantastic Mr. Fox (USA)
Wes Anderson’s stop-action animated version of Roald Dahl’s story about a fox paterfamilias forced by wifely fiat to disavow what he does best (kill chickens) utilizes the director’s unique sense of the absurd to better effect than his live action films do. Animals and humans rarely get this much comic mileage out of each other.

10. Uncle Boonmee Who Can Recall His Past Lives (Thailand)
Apichatpong Weerasethakul’s Cannes winner is the most relaxed movie ever made about death, a personally stylized TV melodrama in which cancer sufferers reconcile with the ghosts of relatives and one plane of existence is just as boring as another. The director doesn’t mean for you to believe it. You just have to soak it up.

The Illusionist (France): Nostalgia is rarely as evocative, or as funny, as it is in Sylvain Chomet’s beautifully rendered animated appreciation of Jacques Tati.

Let Me In (USA): If this kid vampire thriller isn’t as good as the Swedish original (my #1 last year) it’s probably because it can’t provide the shock of the new. But the story actually makes more sense set in early 1980s New Mexico.

Another Year (UK): Mike Leigh’s not-so-subtle exploration of what it means to be happily married, especially to other people who aren’t. Still, not as involving as his last film, Happy-Go-Lucky, which never opened here.

Lourdes (France/Austria): No one’s spiritual convictions will be changed by this low-key tale about a miracle that takes place in the titular tourist trap for the infirm, but it will definitely make you think about them in a different light.

Milk of Sorrow (Peru): A young woman internalizes, in a peculiarly physical way, the miseries her late mother suffered at the hands of revolutionaries. Director Claudia Llosa plays the magic realism for both poignancy and black humor. Peruvians will understand and the rest of us just have to learn some things we didn’t realize before.