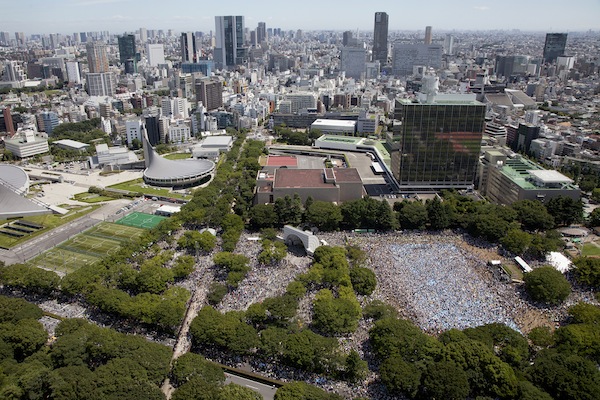 Here’s this week’s Media Mix, which is about differences in reported numbers of the turnouts at those antinuclear demonstrations. In the article I mention the efforts of the Japan Visual Journalists Association, and my editor wanted to use one of their aerial photos to accompany the column but there apparently wasn’t enough time to determine the whole licensing matter. For those who would like to view JVJA’s photos of the demonstrations, here is the website for July 16 and here is the website for June 29. It should be noted that JVJA does not, to my knowledge, make their own calculations, but there are methods for doing so which I didn’t have room for it in the column. According to an article in the July 7 Asahi, at about 6:30 pm on those Fridays when there are rallies in front of the prime minister’s residence, the organizers start counting the number of participants. “Several people” do the counting using “counting devices.” Each person is given a sector to count. The combined number is used “as a base figure.” Then, just before the end of the demonstration, the various counters make an eyeball estimate of how much the crowd has grown since 6:30 and extrapolate the base figure accordingly. The police have a different method. The Asahi says that whenever a large demonstration takes place they send plainclothes officers to the site to “estimate the number” by isolating pre-determined areas and calculating the number of people in those areas based on “density.” For instance, if the crowding is intense but people still have a degree of free movement, the density is measured as 8 persons per square meter. The Asahi says that this method “requires a certain amount of skill” but that the police have never openly disclosed the method. In fact, more interesting than the counting methodology is the reason for not revealing their numbers except through anonymous leaks. As mentioned in the piece, the numbers that are usually attributed to the authorities are provided by reporters from major media outlets who belong to the press club attached to the police (in this case the Tokyo Metropolitan Police, not the National Police Agency). They receive rough estimates from their various sources and then, together, reach an agreed upon number after talking it over (dango). I’ve read this explanation several times, but the one I quote in the article is from Nikkan Gendai, a tabloid that doesn’t belong to the press club, which is probably why the reporter stated rather boldly that “the police don’t count accurately because they have no intention of disclosing the correct number.” Also, Gendai says that the major media’s method of basing their own numbers on anonymous police sources calls into question their “morality.” This dynamic was explicated somewhat humorously in an article in the magazine Alterna. A reporter confronted the police’s PR flack with the rumor that media numbers were derived from police leaks, and the rep said that the police are not interested in the correct number, but that they are interested in how the media determined the number they attribute to the police. Well, so are the rest of us.

This entry was posted in Media and tagged anti-nuclear movement, Metropolitan police. Bookmark the permalink.