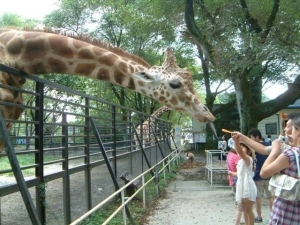 Here’s this week’s Media Mix about the fate of Japanese zoos. In the piece I didn’t talk very much about the media’s role in the way zoos are presented to and perceived by the public, mainly because we’ve covered that angle several times before, but it’s important to point out that the kind of attitude characterized by people’s open affection for Hanako while denying her terrible situation is reinforced by media stories about how effective animals are in “healing” the troubled souls of humans. It’s also important to point out that this attitude is by no means shared by all Japanese people–a good portion of the individuals who signed the petition to send Hanako back to Thailand were Japanese. The point is that because the media tends to be purposely even-handed in its coverage, whatever realities they uncover with regards to the inherent cruelties of captivity are more than offset by the delight that otherwise unknowing “average people” derive from just observing wild animals in the flesh. The articles we cited in the column all contained hard truths about the substandard conditions at most public zoos (the ones with better conditions are obviously few and far between), but also balancing notes about things that are meant to be heartwarming. The Yahoo story about the small zoo in Komoro, Nagano Prefecture, also mentioned a popular show feature wherein its penguins are lined up along a water slide to feed on mackerel that goes zipping by. Observers laugh and cheer, but objectively speaking the penguins look pretty desperate trying to grab a bite. The article made the show feature out to be an act of ingenuity since it attracted more visitors without adding anything to the zoo’s budget.

This situation has less to do with that stereotyped idea of the Japanese affection for “cuteness” than it does with a reluctance to face up to reality. The people who still want to be entertained by zoos have never had their assumptions challenged by the media and educational institutions. As mentioned in the column, sometimes this has to do with business–for-profit zoos, aquariums, and marine parks have to make a living. But that sort of justification–though unsupportable to many people–doesn’t hold for public zoos. There, the only explanation is that the zoo was conceived as a public good, a recreational venue for everyone. That idea automatically implies that the animals are there for our pleasure, and so while they may be living in situations that are unnatural, even miserable, it’s seen as a worthy sort of sacrifice.

This entry was posted in Media and tagged animal rights, zoos. Bookmark the permalink.