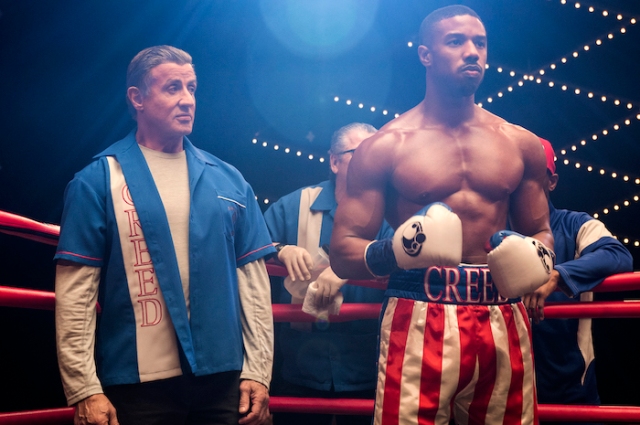 As a gambit to legitimize the reboot of a franchise that should have been put to rest years ago, this sequel to the potently effective Creed works surprisingly well, but probably for the wrong reasons. Though it continues the story of fighter Adonis Creed (Michael B. Jordan), the illegitimate son of Apollo Creed, the early nemesis and then BFF of Rocky Balboa (Sylvester Stallone), who has made his own name as a professional boxer thanks to the ministrations of Rocky, it flatters moviegoers with long memories, since it basically revisits the original Rocky series’ most gaga installment, Rocky IV, in which Apollo Creed was killed in the ring by the Soviet-engineered bruiser Ivan Drago (Dolph Lundgren), who then had to fight Rocky in what everybody understood was a revenge match. In Creed II, Adonis, who has recently won the heavyweight title, is pretty much forced to fight Drago’s son, Viktor (Florian Munteau), to defend that title.

Though Ryan Coogler, who wrote and directed the first Creed, is installed in the credits as a producer, the sequel is directed by Steven Caple Jr. and written by Stallone and Juel Taylor, and as such it returns with shameless aplomb to the original Rocky style—long on elliptical montages, short on rich character development, ripe with feelings that aren’t earned. That said, Caple is the equal of Coogler when it comes to action set pieces, and the boxing segments are as brutally absorbing as they need to be. More to the point, Adonis’s relationship with his girlfriend, a singer named Bianca (Tessa Thompson) with a genetic hearing problem, is fleshed out in ways that makes the romantic subplot so much more affecting than the Rocky-Adrian relationship in the original series. Moving into marriage and then fatherhood while his life is thrown for a loop due to celebrity, money, and the attendant need to prove himself as a symbol of modern American masculinity, Adonis approaches his new responsibilities with understandable trepidation, and Jordan and Thompson’s chemistry in this light is visceral to the point of painful. If Creed II succeeds as anything, it’s as a mature love story that doesn’t avoid the ugly truths.

But that isn’t what the movie is selling. It’s selling the legacy fight between Adonis and Viktor, who is trained by his father in the Ukraine for one purpose only, to seek vengeance on Rocky for Ivan’s own humiliating defeat years ago, which destroyed his marriage and made him an exile in his own country—even after the breakup of the Soviet Union. An opportunistic American promoter (Russell Hornsby) seeks out the Dragos, knowing it’s what they want, to propose a fight with the newly crowned Adonis. Rocky is against it for reasons that make sense only within the parameters of Rocky movies, but those reasons manifest unfortunately when Adonis is beaten badly and almost dies. Of course, there is going to be a rematch, and the movie is nothing if not honorably realistic about the time frame, but during the year of his recovery and rehabilitation there is plenty of time for babymaking and those montages, not to mention patching up Adonis’s relationship with Rocky, which was shattered with the loss.

Creed II thankfully avoids the jingoistic hyperbole of Rocky IV (which some saw as satire). The US-Russia relationship in the movie is strictly focused on Drago’s desire for payback, and the movie’s cleverest comeuppance in this regard is bringing back Brigitte Nielsen as Drago’s ex-wife (as well as Stallone’s) to taunt him as a loser in order to spur him to greater things. How Ukrainian this is, I’m not sure, and I certainly don’t think Ivan has much love to lose for the Russians in his corner. In a way, it’s a lost opportunity, since Drago is potentially the most interesting character in Creed II (Viktor, as played by the neophyte Munteau, is a lunkhead nonentity). Which is to say the movie has too many things going on for its own good. It could have been a contender. As it stands, it’s just another good boxing movie.

This entry was posted in Movies and tagged Michael B. Jordan, Rocky, Sylvester Stallone. Bookmark the permalink.