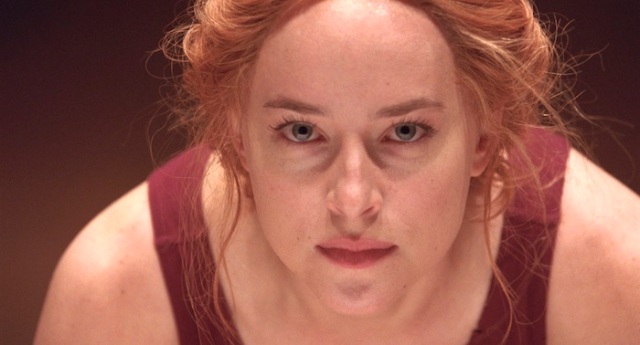 Few genres have become as formulaic as horror movies, and one of the better things you can say about Luca Guadagnino’s reimagining of Dario Argento’s 1977 slasher classic is that it avoids the cliches you expect. Unfortunately, it replaces them with other cliches, mostly from opera and political thrillers. In fact, it’s probably best not to categorize this new version of Suspiria as a horror film, since it will mislead fans of the genre—there’s not a whole lot of suspense, and rather than gore the film charges its shocks with unsettlingly bizarre visuals—and repel those who usually eschew horror movies, though even this latter group might find it difficult to swallow.

Having never seen the original, I approached it with an open mind and, since I don’t really like conventional horror, the movie exerted a certain peculiar fascination, though, to tell the truth, I really had no idea what was going on from scene to scene and would have a very hard time trying to explain the plot in detail. The story takes place in Berlin in the autumn of 1977, when West Germany was going through political upheaval due to antics by the likes of the Red Army Faction. A member of a local avant garde dance troupe, Patricia (Chloe Grace Moretz), consults with an elderly psychiatrist (Tilda Swinton with tons of makeup) about a coven of witches who use the dance company as a kind of front. When Patricia disappears, the doctor tries to investigate the dance troupe to find out what happened to her, and in the process we learn that he lost his wife in the Holocaust, though it’s not clear if she was killed or just disappeared, like Patricia. Eventually, this through-story becomes annoyingly complex and muddied as Guadagnino intercuts it with scenes from inside the dance troupe that suggest the leader, Madame Blanc (also Swinton), is, in fact, a witch who recruits young women as dancers to fulfill some sort of Satanic inevitability that I could never really figure out. The film shifts its focus on a new American recruit, Susie (Dakota Johnson), who has escaped a rigidly religious upbringing in the Midwest to feed her art jones in Europe’s most celebrated divided city.

To say the dance sequences, which are set to Thom Yorke’s hyperventilating score, are ridiculous is to question the film’s priorities. Good horror revels in ludicrous brainstorms, but one thing that Suspiria truly lacks is a relatable sense of humor. The scary scenes are usually built around body horror meant to mimic the unnatural choreography that Madame Blanc favors, and which Susie seems to understand preternaturally. There is a kind of genius to these scenes, though they aren’t really scary, just discomfiting, and, to paraphrase Bob Dylan, they sit in the movie like a battleship in a bathtub, overcompensating for the meandering plot and the confused themes. And it just goes on forever. One thing you have to say about Suspiria is that its original, but I’m not sure if that’s what horror fans are really into.

This entry was posted in Movies and tagged Luca Guadagnino, Tilda Swinton. Bookmark the permalink.