Review: If Beale Street Could Talk 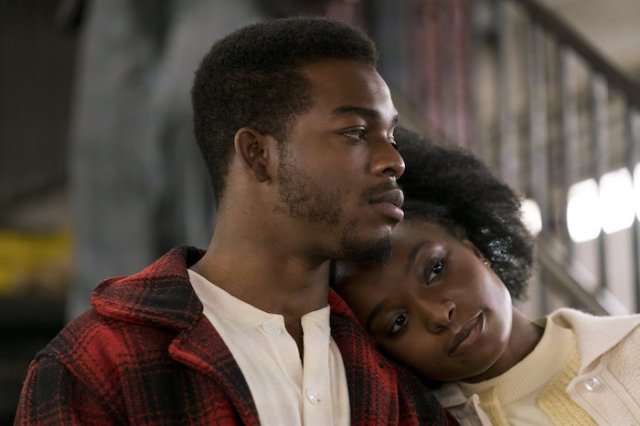 Reportedly, Barry Jenkins wanted to do an adaptation of James Baldwin’s 1974 novel before he directed Moonlight, and the consensus seems to be that the only reason he got a green light to tackle Baldwin’s tricky story of tender love in the jaws of gross injustice was his previous movie’s Best Picture Oscar. By most measures, If Beale Street Could Talk is the superior film, though it likely won’t gain the same amount of attention; which isn’t to say both films are significantly different in terms of style and mood. Jenkins might be too tasteful, in fact, but then so was Baldwin despite the undercurrents of anger that course through his writing. There are moments of such incandescent beauty in Jenkins’ film that you almost can’t believe it’s about a man being railroaded for the crime of rape.

As with Moonlight, Jenkins wisely does not attempt to make his characters “understandable” or sympathetic to white viewers. Tish (KiKi Layne) and Fonny (Stephan James) are sweethearts of an almost classic sort. They’ve known each other since childhood, growing up in Harlem in the 1960s, and entering their 20s they fall in love and Tish becomes pregnant, news that is not met with the usual gnashing of teeth on the part of their parents, who, despite their dynastic differences and a brief moment of shocking violence, celebrate the event with a bottle of cognac. The joy is short-lived, as Fonny, an aspiring sculptor who seems to be making a name for himself—he’s already got his own loft—is arrested for raping a Puerto Rican woman by a racist policeman who has it in for Fonny. The movie is bifurcated between attempts by Tish and the two families to hire a lawyer and convince the accuser, who is conveniently back in Puerto Rico, to change her story; and, in fitful flashback, the story of Tish and Fonny’s love affair. Jenkins is nothing if not careful, describing both developments with a slow, close attention to detail that brings out the story’s tragic elements without making too much of them. Tish and Fonny’s love is delicate and deep, while the case against Fonny is, in contrast, immovable, like a huge boulder lodged in a crevice.

Jenkins’ signature shot is the hazy long take, which renders many scenes as dreams, or, perhaps, because they’re usually narrated by Tish, filtered through her memory. A recollection of a meeting that Fonny has with an old friend, which took place supposedly at the same time as the rape and thus would offer Fonny an alibi if his friend weren’t an ex-con and thus automatically rejected by the D.A., is uncharacteristically vivid, the conversation notably naturalistic, the mood relaxed, and thus seems separated from Tish somehow. If Jenkins fails to bring the expected tension to Fonny’s legal problems, it only accentuates the notion that black people, both then and still now, know that once the white man has them where they want them, there’s little they can do. If Beale Street could talk—a reference to New Orleans, not Harlem—it would likely scream in frustration, but Baldwin and Jenkins would rather we see how love still has the power to make the worst of matters survivable.

If Beale Street Could Talk home page in Japanese.

This entry was posted in Movies and tagged Barry Jenkins, James Baldwin. Bookmark the permalink.