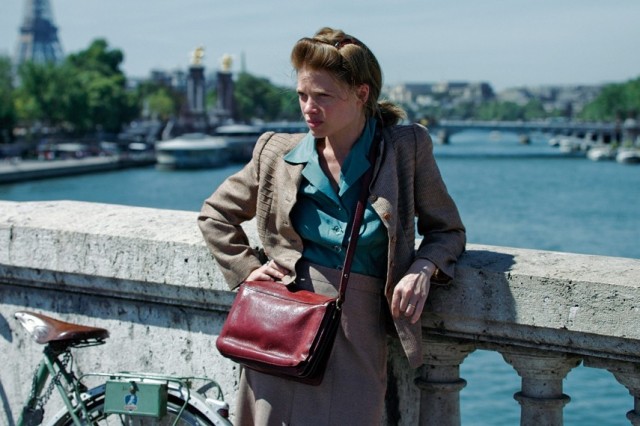 Based on Marguerite Duras’s 1985 novel, La douleur, Emmanuel Finkiel’s film removes the fictive conceit and presents the story as a fairly straightforward memoir of Duras’s experience in occupied Paris during World War II. It’s easy to understand why Duras boosted the book as a novel and not a memoir: removed from their circumstance by forty years, her memories of that time had been clouded by doubts and second thoughts brought on by trauma and repression, especially given the dramatic impetus of the so-called plot. Duras kept diaries, but since she claimed she had no recollection of actually writing things down their context is virtually meaningless except as exegesis.

Finkiel is bold in transferring the narrative with a stark immediacy that is almost documentary-like in its urge to be taken seriously as fact. Melanie Thierry plays the young Duras as a moody, almost enervated shell of a girl whose only ambition is to get her husband, Robert (Emmanual Bourdieu), out of detention. Robert was arrested by the Nazis as part of the Resistance. It’s often difficult to square her dogged determination to secure Robert’s release with her nagging doubt about whether it’s possible—or, for that matter, with her nagging doubt as to whether Robert is even alive any more.

But the movie is not entirely naturalistic. Duras’s split persona is rendered as such by the fledgling writer observing herself, which Finkiel, in turn, renders visually by doubling her image. This disembodiment serves to make it easier for Duras to sleep with the French Gestapo agent Rabier (Benoit Magimel) in order to glean information about Robert. But even here she seems to be operating on inertia. To say her heart isn’t in it is to deny her any agency in her own survival, which may be the most compelling aspect of her story. She makes it through the war without as much as a glance from the Germans, and afterwards her complicity is not remarked upon by the nationalist forces who punished anyone with a hint of collaboration. She certainly doesn’t feel inclined to join in the celebration. In a sense, she’s almost a non-person, which may explain why her memoir-novel seems written by a third person and makes such a riveting film. Robert, in effect, becomes a red herring: Maybe he doesn’t even exist. Was that stillborn child we see in flashbacks a figment of her fertile imagination? Though the truth is out there, Finkiel would prefer we make up our own, and for once it’s a fitting challenge to the viewer.

This entry was posted in Movies and tagged Marguerite Duras. Bookmark the permalink.