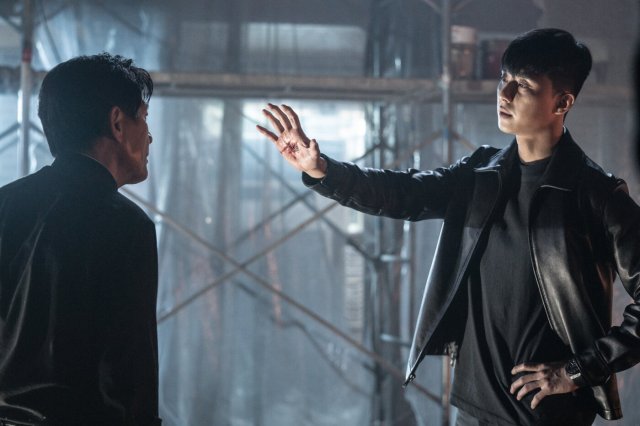 Though Korean movies still find wider distribution in Japan than do movies from other countries outside of the U.S., some Korean movies have an easier time of it than others. The fact that this occult actioner features Park Seo-jun, who stars in the wildly popular Netflix drama Itaewon Class, is probably the main reason for its being picked up. On the surface, the high-concept premise—a mixed martial arts fighter moonlights as an exorcist—didn’t hurt, but all these elements don’t necessarily blend together in a satisfactory way. Park himself often looks as if he’s not entirely sure what he’s supposed to be doing when he isn’t throwing flame balls at Satan’s spawn.

Like all good Korean action films, and quite a few non-action films, The Divine Fury is premised on revenge. As a child, Yong-hu loses his widowed policeman father after the latter is savagely attacked during a routine traffic stop, and denounces his father’s Catholicism when he realizes that this faith did nothing to alleviate the pain of losing a wife and didn’t protect him from the evil in the world. He becomes a professional fighter whose m.o. is beating his opponents within an inch of their lives in the first round, fired up by a hatred for humanity. Fortunately for him the world loves to watch this kind of thing and rewards him handsomely. He lives in a luxury condo in central Seoul and has fans the world over, but, of course, he’s never happy, and one day he develops a painful wound on the palm of his hand that he eventually come to learn is stigmata. He swallows his pride and consults Father Ahn (Ahn Sung-ki), a have-holy-water-will-travel exorcist for hire, who tells him that due to his denunciation of his father’s faith, evil spirits are battling for his soul.

As it happens, a smarmy, ageless nightclub owner (Wu Do-hwan), contains the evil spirit that killed Yong-hu’s father, and now seems bent on taking over Yong-hu, but the movie never quite calms down long enough to make sense of the whole evil possession thing. Those familiar with The Exorcist will appreciate the script’s fidelity to the lore of demon possession—the naming of names, the transmigration of evil from one body to another, and the various tools at the disposal of the exorcist—but we never get a clear idea of how or why the nightclub guy is doing what he’s doing except that it looks like he’s having fun; and it could be a lot more fun if the first element in the high-concept theme, that of the martial arts fighter, were exploited more elaborately. As it stands, Yong-hu does more soul-searching and demon-denouncing than he does ass-kicking. It’s a muddled though nonetheless handsomely staged thriller that also lacks much in the way of campy horror, relying too much on cheesy special effects and uninspired body makeup (though the lizard-man thing at the end is pretty good). Park Seo-jun stans may be satisfied because they get a few scenes of him without his shirt on, but when plot integrity requires the donning of a priest’s collar, even that kind of fan service is compromised.

This entry was posted in Movies and tagged Park Seo-jun. Bookmark the permalink.