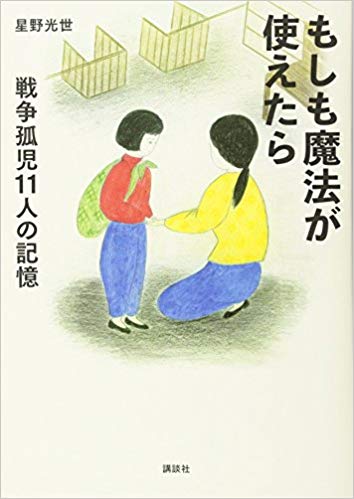 Here’s this week’s Media Mix, about children orphaned after World War II. As described in the column, the Japanese media has avoided the topic for years and most likely decided to finally cover it because, as with many controversial subjects related to the war, the generation that experienced it firsthand has almost died out. The war orphans were quite young when the war ended, but they’re now in their 80s. Of course, some freelancers and smaller media have talked about the orphans for years, and one of the people who has been instrumental in drawing attention to them is Mitsuyo Hoshino, who is not a reporter but rather a woman, now 84, who lost her parents and four siblings in the Tokyo air raids. Like many children in the capital during the war, she was evacuated to the countryside. According to various media who have interviewed her, she kept her memories of that time to herself until 2013, when she visited a war archive in Sumida Ward. The experience prompted her to convey her memories through drawings, many of which were of war orphans she saw on the street after the war when she returned to Tokyo. (She herself was not a street child) In 2016 she self-published a book of these drawings and later the publisher Kodansha commissioned a larger book that supplemented the drawings with Hoshino’s writings about orphans in Tokyo, Yamagata, and Kobe. Hoshino has told reporters that her motivation was simple: Nobody had written much about these children and so she wanted to record their experiences “so future generations will understand” what happened. In the sense that her book may have opened the door for major media to finally approach the subject, her hope wasn’t in vain.

This entry was posted in Media and tagged Mitsuyo Hoshino, war orphans. Bookmark the permalink.