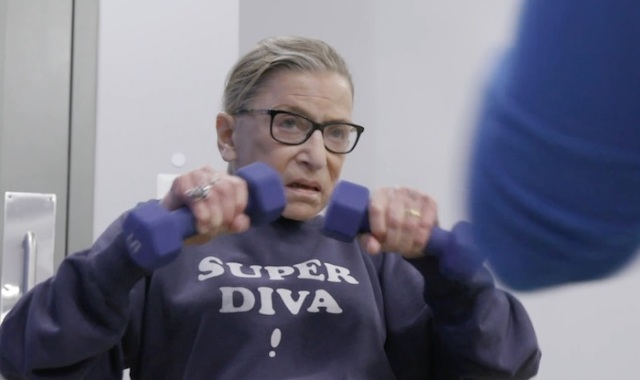 Having seen Mimi Leder’s On the Basis of Sex, I approached this documentary about the life of Supreme Court justice Ruth Bader Ginsburg equipped with a certain store of images and facts that I assumed would aid me in understanding the iconic legal hero, and was somewhat taken aback when I left with more questions than when I went in. It’s not often that a dramatic narrative feature tells you more about a subject than a documentary, and the only answer I can come up with is that the filmmakers of RBG, Julie Cohen and Betsy West, are so enamored of their subject they assumed that devotional regard would satisfy anyone who viewed it, including the members of the Academy of Motion Picture Arts and Sciences, who nominated it for an Oscar.

As explained in Basis, the essence of Ginsburg’s stature in history is her role in advancing gender equality in a variety of American institutions, and RBG does a fair job of extending this story, but without the kind of specific examination of trial cases that Basis presented, the viewer is compelled to take the directors’ word for it. That Ginsburg stood up to the monolith of male-dominated jurisprudence is mentioned again and again, but without clear cut examples that prove how she used incisive legal arguments to change the American landscape so that women had an equal chance at succeeding, we’re left with the conclusion that it was simply due to her spiky personality, since it is that aspect of her being that the filmmakers fixate on. For sure, they interview women (and even a few men) who benefited from Ginsburg’s representation and decisions, but they provide little in the way of hard evidence as to the obstacles she helped them overcome.

There is certainly a good deal of entertainment value in watching the pint-sized octogenarian working out at the gym and snarking on comedians who deign to portray her on TV. And while she has stated clearly that her marriage to tax lawyer Marty Ginsburg had much to do with not only shaping her life, but shaping her understanding of the law, the large amount of running time devoted to that union has real value. But in the end, it seems like a waste that Cohen and West didn’t respect the enormous effort RBG put into learning about the law by making their own effort to explain how she actively changed that law. I pretty much already understand how she changed American pop culture.

This entry was posted in Movies and tagged Ruth Bader Ginsburg. Bookmark the permalink.