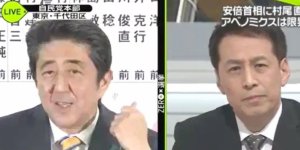 Here’s this week’s Media Mix, about the media coverage of the recent general election and the prime minister’s often testy relationship with the press. One aspect of this matter that I didn’t mention in the article is Shinzo Abe’s use of social media and the Internet to his advantage. Though the LDP did a fairly good job of intimidating the traditional media, the web is so free-form and elastic that an organization that powerful can say whatever it wants without worry about being questioned. Of course, people are just as free to criticize Abe on the Internet, but those voices tend to recede into the vastness of cyberspace. On the night of the election, after he had made the rounds of all the TV stations wearing a countenance that was much darker than his huge victory seemed to warrant, Abe appeared on the video site Niconico Douga with a big smile saying that the “voices of Niconico Douga users” had made a big impression on him, and that he would “listen to them” intently. It’s difficult to believe every subscriber to the service approved of Abe’s work and offered helpful advice, but it’s one of the luxuries of the medium that you can pick and choose the remarks you want to hear from it. Abe was also more proactive and positive on his Facebook page than he was on the campaign trail. As one political science professor told Asahi Shimbun after the election, practically speaking there are just as many people complaining about the traditional media’s “sense of entitlement” as there are people who thought Abe is out of touch, and this works to the administration’s advantage, too, since it emboldens the LDP leaders to think that they can ignore the mainstream press. In any case, it’s not exactly a new thing. In 1993, the head of the news department of TV Asahi was summoned to the Diet because the government thought the station had violated the principles of neutrality with regard to a recent general election. Since then there still hasn’t been a serious debate on what makes for effective election coverage. The press and the political world will likely just continue to look at each other with suspicion, which is not necessarily a bad thing, except that neither seems to think about what would really benefit the public.

This entry was posted in Media and tagged Japan general election, Shinzō Abe. Bookmark the permalink.